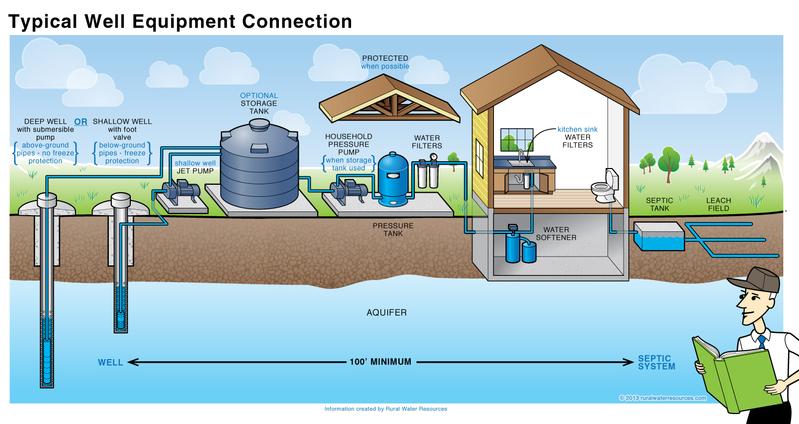 Approximately 40,000,000 Americans receive their drinking water from Individually owed and operated sources, such as household wells.  As “private” sources, well owners are soley responsible for the quality of water provided.

The EPA recommends well owners to test water for bacteria and nitrates at least once a year.  If any changes are noticed in the water’s taste, odor, or color, conduct testing on a quarterly basis.

The EPA recommends testing for the presence of lead in your primary kitchen tap, at least once.

One of the most important and basic concepts to understand about the Earth’s water is that it is not pure. The more shallow the well, the greater the potential for contamination.  Bacteria-namely coliforms are the most common contaminants found in private wells.  Microbiological organisms are naturally occurring and can be found in the source water as well as in the plumbing systems.  Although the potential for serious diseases remains a concern, the most common illnesses due to the microbiological contamination of drinking water are short-term gastrointestinal disorders.

Nitrates represent the second most common type of contaminant found in private wells.  The presence of this naturally occurring chemical suggest that animal and/or human wastes, or agricultural applications like fertilizers are entering the well.  Nitrates are a special concern to children and women of child bearing age.

The contamination of private wells by other chemical contaminants, whether naturally occurring or man-made, remains a potential problem, but generally less frequently than the types described above.  The degree to which any well is vulnerable to contamination depends on a variety of factors, including local geology, depth to water table, characteristics of soil, water, and climate, local land use activities, and characteristics of home plumbing materials.

The following is a Quick Reference List of Noticeable Problems in private water supply, as reported by the EPA:

Scale or scum from calcium or magnesium salts

Green stains on sinks or faucets caused by high acidity

Brown/red stains on sinks, dishwasher or clothes in wash points to dissolved iron

A rotten egg odor can be from dissolved hydrogen sulfide gas or certain bacteria.  If the smell only comes with hot water, it is likely from a part in the water heater